For the first time in over 2 decades, there is a new team to beat in the AFC East and it is the Buffalo Bills. After finishing last season with a 13-3 record, one game away from reaching the Super Bowl, the opportunity is here to solidify themselves this offseason as one of, if no the team to beat this season in the AFC and NFL.

Buffalo does not have many glaring weaknesses on this team, as general manager Brandon Beane has done a great job building out this roster over the past few seasons. If Beane can upgrade a couple of positions on each side of the ball could be enough to really have a chance to win it all this upcoming season. 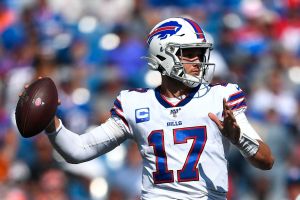 In the past it wasn’t usual to see a quarterback start during their rookie season. Allen ended up starting 11 games in his rookie season in 2018 where he struggled a ton.. Last season, he had an incredible 2020 season, finishing 3rd in the MVP race; 4,544 yards also rushed for 421 for 8 TD and now has 1,562 rushing yards for 25 TDs in his 3 years combined. Allen’s past 3 seasons:

One of their biggest weaknesses last season was their rushing offense which finished 20th in the league, despite having one of the best rushing QBs in the league.

Rex Burkhead would provide them a solid veteran backup that can provide them with receiving help out of the backfield. UNC RB Michael Carter is a bull, he’s a machine that never stops churning, and would fit in so well in Daboll’s offense. Jaret Patterson, is a walking highlight reel and was a star this season at Buffalo, which the local ties definitely helps too, but is a very similar back towards how Singletary played at FAU.

John Brown turned out to be such a great addition for them when he signed in Baltimore, but his cap hit was way too high for his age and they had to cut ties. They need to add one more receiver that can go alongside All-Pro Stefon Diggs. Diggs was the perfect addition last offseason for this offense, especially towards helping with Allen’s growth. Slot receiver Cole Beasley quietly had one of the best seasons in the league last year for a wideout, earning All-Pro honors as well. Gabriel Davis had a terrific rookie season last year and will have plenty of opportunities moving forward in this offense. Even with Davis, the Bills still need to another starting caliber receiver as it showed it wasn’t enough last year even with John Brown.

Player to Target: Curtis Samuel: Samuel, at 24-years old is one of the bright young receivers in this league, and could be the missing piece for what this offense needs. Samuel is an elite weapon and can be used all throughout the field, in motion, on reverse sweeps; whatever it takes to get the ball in his hands.

The Bills really can use a veteran TE that can be relied upon in goal line and 3rd-down situations. The TE that would seem to make perfect sense is Hunter Henry or if not, Kyle Rudolph, then Jesse James. All 3 are solid blockers, as well as reliable receivers that could help mentor Dawson Know, and would all be an upgrade over Lee Smith.

The addition of Thuney would complete this offensive line, slotting him in at LG. The former New England guard could look to seek revenge and join forces with the Bills. He will definitely get paid as he is the top free agent on the market, but they have some cap flexibility to possibly be able to afford him.

There’s no secret that the Bills love adding former players in Carolina since there’s a ton of ties there with the coaching staff, so expect veteran Kawann Short to consider joining the Bills. Kerrigan has spent his entire career in Washington, but it seems like he would be the perfect fit to replace DE Trent Murphy if he leaves in free agency.

Milano just agreed to a 4-year, $44M deal, so don’t expect them to be spending much money elsewhere at the linebacker position this offseason.

Player to Target: CB Casey Hayward: The former Chargers CB was just let go as they said he did not fit their new defensive scheme. Hayward would be the perfect addition at CB to play on the other side of Tre’Davious White. This would allow him the opportunity to reunite with his former teammate in Green Bay – free safety Micah Hyde.

This site uses Akismet to reduce spam. Learn how your comment data is processed.